Interview with Dawn Scott about the poker ride

Audio file of interview with Dawn Scott about the poker ride.

“Dawn Scott is the mother of Madison Scott, a young woman from Vanderhoof, BC who has been missing since May 28th, 2011

. This Saturday is the 5 year anniversary of her disappearance and Dawn shares how those past years have been.”

Thanks to John Vosper and Valley Country radio for producing this interview.

Madison Scott of Vanderhoof disappeared without a trace on May 28, 2011

She was a young woman, twenty years old at this time and just starting out in life. She never harmed anyone but someone took her.

She is still missing.

The RCMP investigation is ongoing and tips are still coming in.

Someone, somewhere, knows something about what happened to Maddy. It is possible this person or persons may have spoken about her disappearance to a friend or relative.

If anyone knows anything at all, even if you think it is not relevant, please find it in your heart to break your silence and help to end the ongoing nightmare and heartbreak of her family.

Please do not keep this information to yourself. You might be preventing it from happening again.

There is still a reward of $100,000 for information leading to a resolution of this case.

It would be much appreciated if people would look for signs of anything amiss when in the bush or on the water. People are still searching for Maddy. 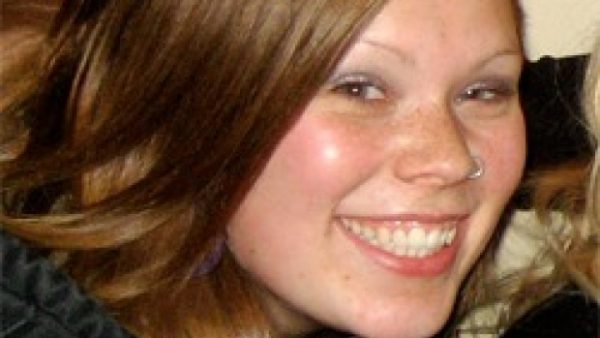 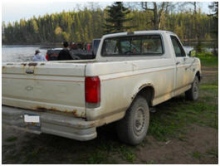 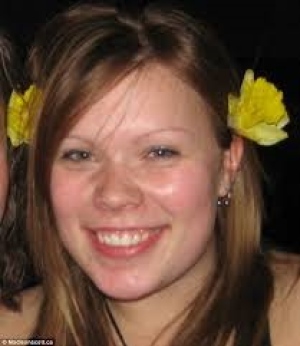 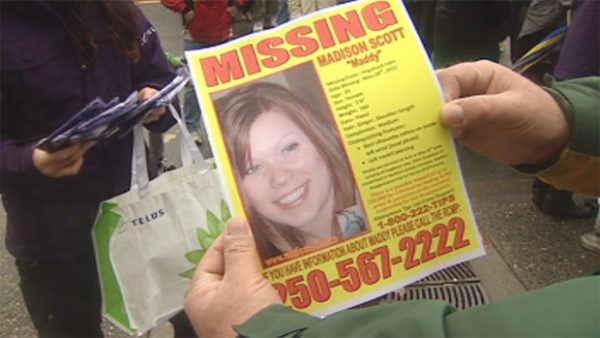 On May 28th come out to the 2016 Maddy Poker Ride starting at or near the Mapes Community hall on the Black water road South East of Vanderhoof, near Hogsback lake where Maddy went missing.

The cost of the poker hands are 25$.  With every 25$ hand purchased you may purchase an additional hand for 10$ while available. Draw cards at the stations along the trail for a chance to win with the best poker hands, $500 for 1st, $300 for 2nd, and $200 for 3rd, and the mystery grand prize. Sponsored by the Vanderhoof Kinettes. 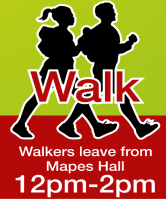 The walking trail starts from the Mapes Community hall then heads East on a trail adjacent to the Blackwater road, down the hogs back road then winds through the forest to Hogsback lake then up on a grassy ridge, along a natural meadow, then back to Mapes Hall. If the complete trail is walked it is around 8 kilometres. 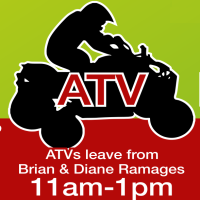 The ATV trail starts at Brian and Diane Ramages approximately 2 kilometres East of Mapes hall on the Blackwater road. The ATV route heads down the Fox forest service road then heads back on the telegraph trail, by Hogsback lake. The trail is of moderate difficulty and is around 40 kilometres. 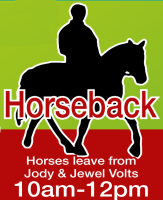 The horse trail starts from Jody and Jewel Volts, then passes through Mapes pit up into the Sinkut hills and back. The trail is approximately 22 kilometres long. 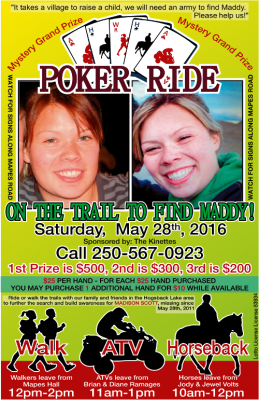 The Mysterious Vanishing of Madison Scott — She Was Last Seen on May 27, 2011 (from First to Know)

Madison and a friend of her ventured out to Hogsback Lake in Vanderhoof, British Columbia, to party and camp by the shoreline overnight.

The 20-year-old ended up staying behind and camping by herself after her friend reportedly hurt her knee and decided to go home. Being an experienced camper who’d explored Hogsback plenty of times, spending the night alone didn’t bother her.

But when she didn’t return home the next day and no one had heard from her, her parents, Eldon and Dawn Scott, called the police to investigate.

Everyone who was questioned about her disappearance admits that the last time they saw her was around 3 a.m.

Her truck and tent were still at the campsite, but she was nowhere to be found. There didn’t appear to be any sign of a struggle, or any reason that she would just vanish without telling anyone.

Madison disappeared 10 miles away from Highway 16.

Over the past 40 years, there have been dozens of young girls and wom

en who have gone missing or were murdered along Highway 16, also known as the Highway of Tears, which traverses through stunning, remote wilderness. The victims range in age from 12 to 33.

The stretch of road has become so synonymous with grisly stories that there are even billboards that say “GIRLS DON’T HITCHHIKE on the Highway of Tears.”

After all these years, authorities are still uncertain whether the vanishings and murders are the work of a single serial killer or multiple offenders.

Madison has been missing for five years, but her family is still holding onto the hope that she’s alive. They often return to the location where she vanished, hoping to find some clues. Volunteers also continue to search the area, tirelessly covering hundreds of miles.

There are countless rumors that have circulated concerning where the missing have ended up, including human trafficking, dungeon-like bunkers hidden on rural properties, and the involvement with local drug dealers.

Watch the video above for more on this family’s heartbreaking story and search for their beloved Madison.

Another year and no Maddy, so another poker ride

We will be holding the 5th ‘On the Trail to Find Maddy poker ride’ this May, Saturday, the 28th at the Blackwater Road/Hogsback Lake area near Vanderhoof.
Please save the date and come out and support us in finding Maddy once and for all! It has been just under 5 long, devastating years without Maddy; however, we all are so grateful for everyone’s continuing support and efforts to help bring her home.
There will be 3 trails again; separate walking, horseback and ATV trails. There will also be prizes to be won and a lunch to follow

Please stay tuned for more details and a poker ride poster to follow.
Thank you so much everyone!! 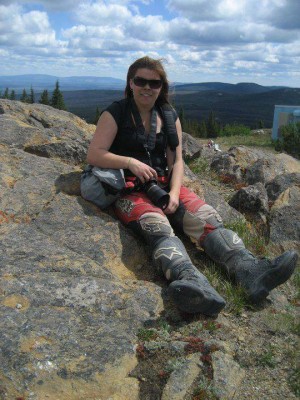 Maddy we need her back!

keeping the word alive and having hope

It has almost been 5 years since Madison Scott went missing. Thanks to all that are keeping the the word of her disappearance in the forefront and spreading it far and wide 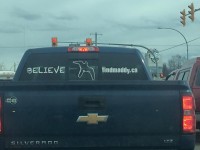 where are you maddy 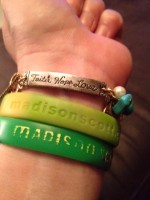 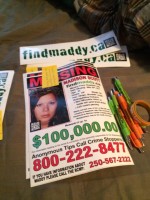 Posters, pens, braclets and bumper stickers emailed out to the world

Madison Scott missing for four years (from the Citizen Newspaper)

Find Madison Scott bumper stickers can be seen all over the north.   – Citizen file photo by David Mah
Four years after Madison Scott went missing, friends, family and police are continuing to hold out hope the mystery of the Vanderhoof woman’s disappearance will be finally solved.

“The police continue to actively work on Maddys’ file,” her brother Ben said in a statement issued Thursday.

“Accordingly, we must maintain our search and awareness efforts to generate new leads to justify the police to continue to allocate the resources to find Maddy.”

Scott, then a vibrant and popular 20 year old, was last seen during the early morning hours of May 28, 2011 at Hogsback Lake, 25 kilometres southeast of Vanderhoof.

When she failed to return home later that day, a massive search was launched but to no avail and despite a concerted effort to keep her name and face in the public’s eye ever since, Scott has not yet been found

“The Maddy posters, stickers, and signs enable us to maintain our presence and enhance awareness in the surrounding area,” Ben Scott said.

These signs and banners are important to maintain the awareness of who Maddy is. The signs are widespread and observed by so many people, including locals, commuters through the community, and others.”

An “All In For Maddy Poker Ride” will be held Saturday with participants traveling through the Hogsback and Blackwater area where Scott went missing.

“This is our team’s primary awareness campaign,” Ben Scott said. “The event keeps people thinking and looking for Maddy in the area that she went missing from with the ultimate goal of increasing awareness.

Nearly 400 people have participated in the previous three poker rides and another strong turnout is expected this year. More information, including start times and locations for horseback and all-terrain vehicle riders and walkers can be found at madisonscott.ca.

“We would like to thank the community for all of your support and we truly are forever grateful for all that has been done to assist our search and awareness efforts,” Ben Scott said. “We are extremely fortunate to have had unconditional support from the community and we are optimistic that this continued support will lead to the desired answer.
“My sister has been missing for four long years, and we need to continue our search efforts to end this nightmare.”

Anyone with information concerning Scott’s disappearance are asked to call the Vanderhoof RCMP detachment at 250-567-2222 or CrimeStoppers at 1-800-222-8477.

We still do not have Madison Scott back home, so we are hosting another poker ride this year. It will be on Saturday May 30th

. Ride or walk the trails with our family and friends in the  Hogsback Lake area to further the search and build awareness for Madison Scott who has been missing since May 28th 2011.

All three poker rides end at Mapes hall, where there will be a meal for the participants. 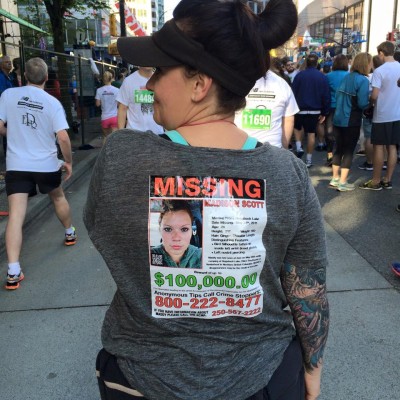