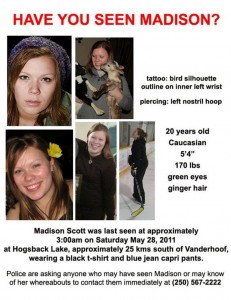 “It is important that we determine what happened that night, what her plans were for Saturday and the rest of the weekend,” RCMP spokesman Sgt. Rob Vermeulen said. “We have conducted some interviews, but it is important that we speak to anyone and everyone who will help piece together the bigger picture

. We still have many questions, as does Madison’s family.”