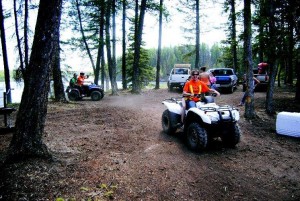 The Vanderhoof community was “all in for Madison” on Saturday – hoofing, hiking and motoring around the Hogsback Lake trail system.

This was the area where Madison Scott, 20 at the time, was last seen. She attended a lakeside party with many of her friends. She was never seen again

. It was one year ago today.

Her family and friends organized a commemorative poker ride for the one-year anniversary, to raise awareness, show support, and get hundreds of new sets of eyes out on the terrain.

An estimated 600 people signed up at the Mapes Community Hall then rode quads, saddled up on horses, or set off on foot. Many paid into a poker contest, with cards drawn at various stations around the route, but that was just for fun. There were prizes for the best hands, and door prizes also, but people were there with the “All In For Madison” mantra at the top of mind.

“I’m just here to show support for Maddy’s family. I work with her cousin,” said one pedestrian pushing a baby jogger on the foot path.

“It’s a great day for a ride. I didn’t know Maddy but I know have awful it must be for her family to not know what happened,” said a dirty-faced participant. The ones with the dirtiest faces were the quad riders.

A lunch was provided, as was sunscreen and bug repellant, and a large team of volunteers in high-visibility shirts were visible all around the wooded course. There were numerous directional signs and forestry tape marking the routes, so even the off-road portions were easy to follow.

Although Scott’s family refused interviews and there was no visible police presence, several media outlets and a documentary film crew were on-site to record the event. A Facebook group exists for ongoing updates about the case of the missing girl, and a dedicated website (www.findmaddy.ca) is available for information.

“This investigation remains a priority for North District Major Crime,” said RCMP Const. Lesley Smith, North District Media Relations Officer. We believe that there is information out there and it is our hope that someone will come forward to help us determine what happened. The police need information and Maddy’s family needs answers.