Parents of missing local woman speak out (from Omineca Express) 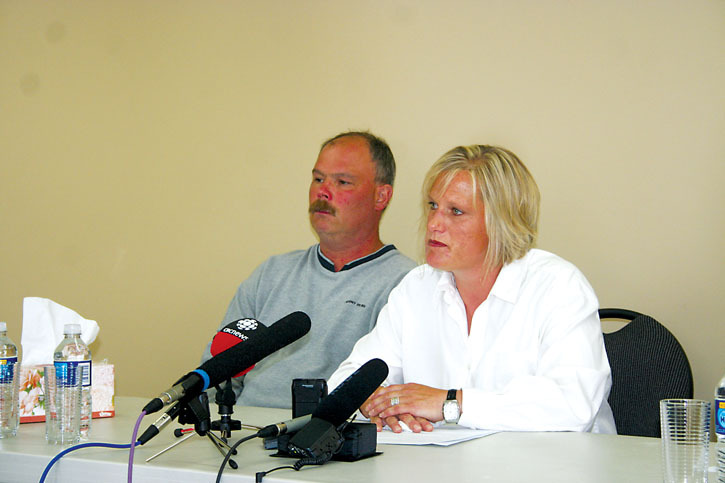 Dawn and Eldon Scott, the parents of missing local woman Madison Scott, issued a public plea last Tuesday for information in relation to their daughters disappearance. Scott was last seen at a party at Hogsback Lake at 3 a.m. on May 28.

The parents of missing local woman Madison Scott issued a plea to the public last Tuesday to help them find their 20-year-old daughter.

Scott left Vanderhoof on Friday May 27 with the intention of camping overnight at the lake.

Her family called the Vanderhoof RCMP detachment on Sunday May 29 at 2 p.m. when she failed to return home. Police who attended the area located her tent and her truck, but extensive search efforts to locate her have been unsuccessful so far.

During a press conference at the Omineca Safe Home, Madison’s parents Eldon and Dawn Scott described her as “a beautiful, caring and loving daughter, sister and friend.”

“She is a passionate 20-year-old young woman who loves sports and photography. She has a great sense of humour and she loves to socialize with family and friends,” said Dawn Scott.

Dawn also said that the family have been “overwhelmed” by the support shown from the community.

“We are thankful for the police and Search and Rescue personnel who used every tool and resource available to conduct a thorough search of the area,” she said.

“And then there are the dozens, even hundreds of volunteers who continue to return to Hogsback Lake daily to look through the area and surrounding areas. It is hard to believe all that they have done and continue to do.”

Anyone with any information is asked to contact the police.

“So please, it doesn’t matter how small or insignificant it might seem, call the RCMP and let them know what you know, heard or saw or think you might have seen … we love our daughter, we need her back home, we need to find her. Please help us,” Dawn concluded.

He said that the RCMP has 14 investigators working on the 300 – 400 tasks generated by information they have received so far.

“We are very pleased with the level of co-operation from those that have come forward or have spoken to investigators.

“However, we do continue to believe that there is more information out there and we are once again appealing to the public to come forward and speak to us,” he said.

He added that investigators are still speaking to those who attended the parties at Hogsback Lake the weekend Madison went missing, and that there are still those who haven’t yet come forward.

“We don’t believe that we’ve made contact with everyone that was out there at this point so that’s what we’re looking for.

While an extensive private search launched by friends and family continues, Dawn confirmed on Tuesday that they have stopped searching by air as of Monday last week.

“It was our decision, our choice,” said Dawn.

Sgt. Vermeulen said the private search is ongoing but that police are now focusing on the investigation and not the search.

“I can tell you I looked at their search map and the search area is huge, they’ve covered thousands of kilometres of roads and trails – it’s been pretty impressive – they’ve searched some areas two or three times,” he said.

He also confirmed that they did send a diver into the lake to search the camp site area, but found nothing.

He described Madison’s disappearance as a “mystery”….

“There’s no evidence of what happened … but I think that makes you more determined to find out what happened,” he said.

Her parents added that they weren’t sure whether Madison was planning to stay for one or two nights at the lake.

“It wasn’t set in stone but it wasn’t out of character … it is a somewhat remote area and the cell service isn’t always that great there and she was with a group of friends,” said Dawn.

She also said that they knew some of the people she was with that night but not all.

“No … it turns out that we don’t know who all the people were that were there.

“Somebody knows what went on out there … somebody saw something and they’re just not coming forward I believe,” said Dawn.

They described her as an experienced camper and said she knew the area well.

“She’s been there a million times before,” said Dawn.

Although police confirmed her phone was active at around 7 a.m. on May 28, four hours after she was last seen, Vermeulen confirmed on Tuesday that it was not anything outgoing.

Madison Scott is described as a 20-year-old Caucasian, 5 foot 4, 170 lbs with ginger hair. She was last seen wearing a black t-shirt and blue jean Capri pants.

The RCMP are requesting the publics assistance in finding Scott. Anyone who may have seen Madison or may know of her whereabouts should contact the Vanderhoof RCMP detachment immediately at (250) 567-2222.