Steven F. Scouller is a documentary and awareness filmmaker who has produced a comprehensive awareness film to aid in the on-going police investigation into the disappearance of missing Vanderhoof girl, 20-year old Madison Scott.

Click on video below or watch on the Vimeo Site

January 5, 2014
At the time of writing this our daughter, Madison Scott, has been missing for 951 days from Hogsback Lake, BC. Maddy’s disappearance on the morning of 28th May 2011 has touched countless people and has greatly impacted our family.

We can never stop looking until we have Maddy home. Our family’s personal limitations in searching for our daughter have, from day one, been tremendously boosted by the diligent work, dedication and support of family, friends, community members and the RCMP.

We were approached by Steve F. Scouller, an independent film maker, who wished to make a film solely about Madison’s story.

Mr. Scouller’s background as an investigative filmmaker leads us to believe that this film will help in our concerted efforts to reach the right people and to encourage those who have the answers to step forward. We are grateful for the making of this film and wish to thank Mr. Scouller for his efforts in helping to keep awareness of Maddy’s disappearance at the forefront of people’s minds. We also give a most heartfelt thanks to all of you who appeared in the film and assisted in its production.

Please watch ‘The Vanishing of Madison Scott’ and please forward any information you may have on Maddy’s whereabouts to the Vanderhoof RCMP at 250-567-2222 or call Crime Stoppers at 1-800-222-TIPS.

Thank you very much.

The Vanishing of Madison Scott

Raising awareness is of vital importance in the search for Madison Scott. Getting all the correct facts and relevant information out in the public domain is paramount. As an investigative filmmaker I set out to document the known facts that surround Madison’s disappearance by constructing a chronological timeline of events based on the facts told via first-hand accounts. It is my hope that this film will be able to assist the RCMP by raising awareness about Madison’s disappearance.

The film delivers an accurate reflection of the unfolding situation and documents the search efforts as well as the on-going processes in place that help to keep the search effort and awareness campaigns alive.

This highly impactive and emotional film acts as a central repository of key information that people can watch to get the facts quickly and effortlessly, allowing the steady stream of information to keep expanding out into the public domain.

It has been a humbling experience to work alongside Dawn, Eldon and their family and friends

. It’s amazing to see first hand the support the community has offered the Scott family and I am appreciative for the help that I have received from the people of Vanderhoof who have helped and supported me in making this film. I’d like to take this opportunity to express my personal thanks to the RCMP for their help and cooperation.

A series of disappearances and murders of women and girls dating back four decades. Now, a break in the case. Peter Van Sant reports 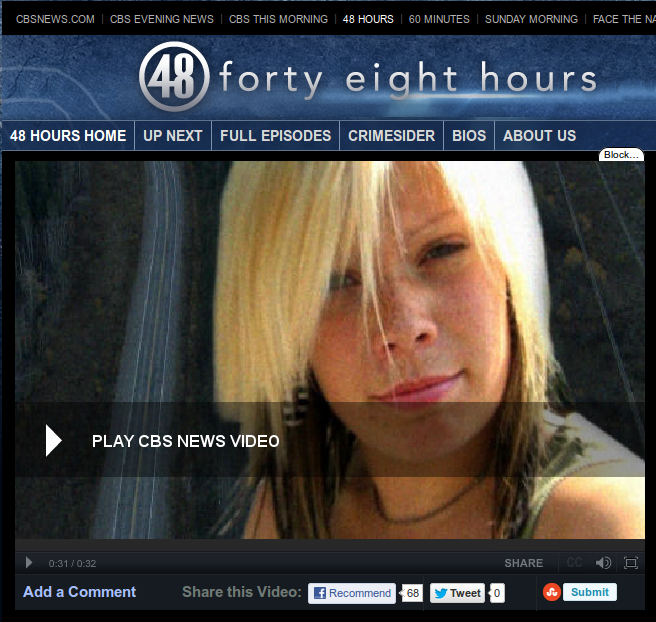 The RCMP released a video reenactment today, covered by media

The RCMP released a reenactment video about Madison’s disappearance with older news releases included. This has been picked up by lots of news media organizations. See links below to video on RMCP video, and news articles 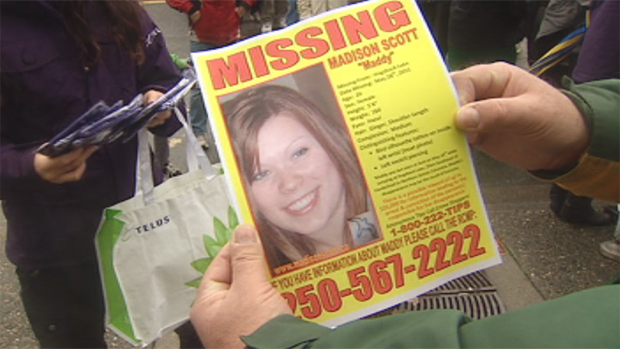 Friends of a missing B.C. woman printed 6,000 flyers to hand out during the Grey Cup event in Vancouver. Even though six months have gone by, they’re determined to find answers.

Madison Scott was last seen at a party at Hogsback Lake, a forest recreation site near the town — about 60 kilometres west of Prince George — in the early morning hours of May 28.

Police investigators determined that Scott was last seen around 3 a.m. PT at the campsite. They were looking to speak to anyone who attended that party, or a second one at the same site that night.

Extensive air, ground, and water searches have turned up nothing, police said.

Even though six months have gone by, Scott’s friends are aiming to reach out as far and wide as possible, which is why they were handing out posters outside the Grey Cup game in Vancouver on Sunday.

In September, Scott’s family announced that a $25,000 reward would be offered for information that leads to the arrest and conviction of the person responsible for her disappearance 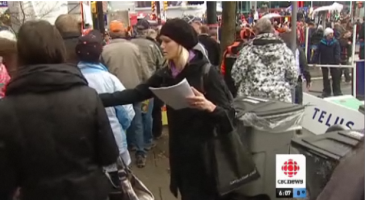 Darren J Douglas made this beautiful video with Nils song. Let’s find her and bring her home!!

V1: Day after day, our hearts our breaking
We hope and we pray, the whole world is waiting for you
We hold on to faith, and pray for tomorrow
That something will break, we’re drowning in sorrow for you

Pre-Chorus: We’ll shine the light (Candles are burning)
We’ll search and we’ll fight (Everyone’s yearning)
Night after night (We’re tossing and turning)
For your precious life (All we can is that…)

V2: The silence is dire, and words are unspoken
Help fill our desire, a family is broken in two
Please search your mind, your heart, and your memory
It’s in you to find, the pieces that carry the truth

V3: Sometimes we cry, tears of devotion
We see through these lies, the world is in motion for you
So hold strong and fight, await your salvation
Your life is our light, to our destination to you